The stork chicks learn to feed themselves 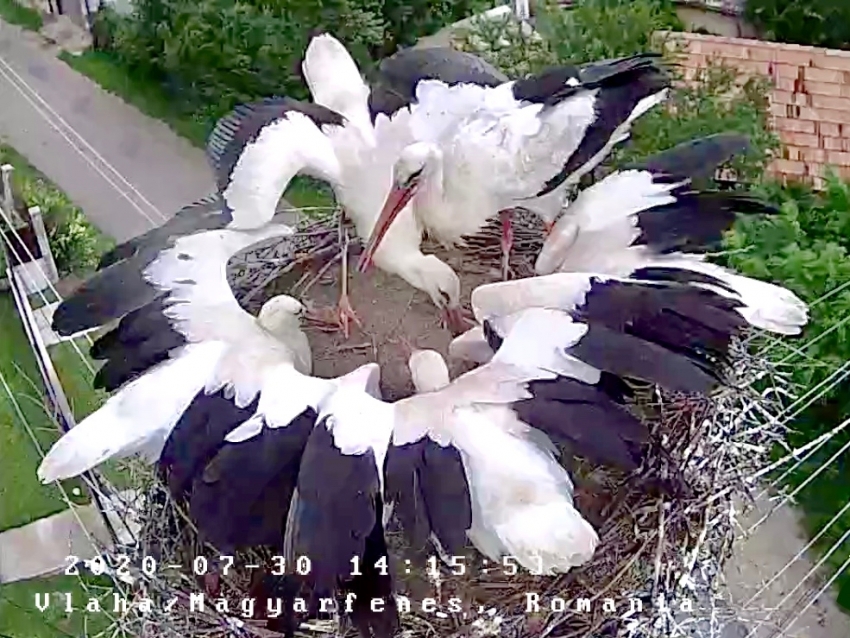 During this week the two adult storks started to bring less and less food to the nest in Magyarfenes/Vlaha so the chicks were forced to take care of themselves. On Tuesday Leske and Miska’s catering service functioned well still. On the photos taken by the camera at 10:22, 13:36, 16:04, 17:32, 19:36 minutes and at 20:54 at night it is visible that the young storks are standing in a circle around an adult stork, that - we thought - brought food to them. From Wednesday these kind of scenes were dropping out and they took the shape for eating at 17:22, 18:42, 19:34 and at 20:06, 21:48. On Thursday and Friday scenes like this were observable only three times. At 14:14, 18:42 and 21:00 and at 13:04, 17:14, 21:10. We were about to deduct that the feedings rarefied, when on Saturday we saw twice that the stork chick on Leske’s calling came immediately to the nest and took the feeding position but did not get anything to eat. Both times the gathering had some kind of purpose. There were foreign storks above. The feeding was becoming more and more awkward for the parents. The stork chicks that were adult size already were anxious to get the food and did not wait for them to regurgitate it in the middle of the nest, instead they were trying to winkle out the food from their parent’s beak. Since there is no food brought to the nest the little storks are not spending much time at home anymore. They spend the nights in the nest but they fly out at dawn and during their wanderings before noon, besides learning how to fly they most probably learn also how to feed themselves. In the afternoons they often loiter on the roof of the Reformed church. From there they can clearly see if one of the parents is heading to the nest and they can be there in an instant if snack or dinner is served and they can consume it quickly.