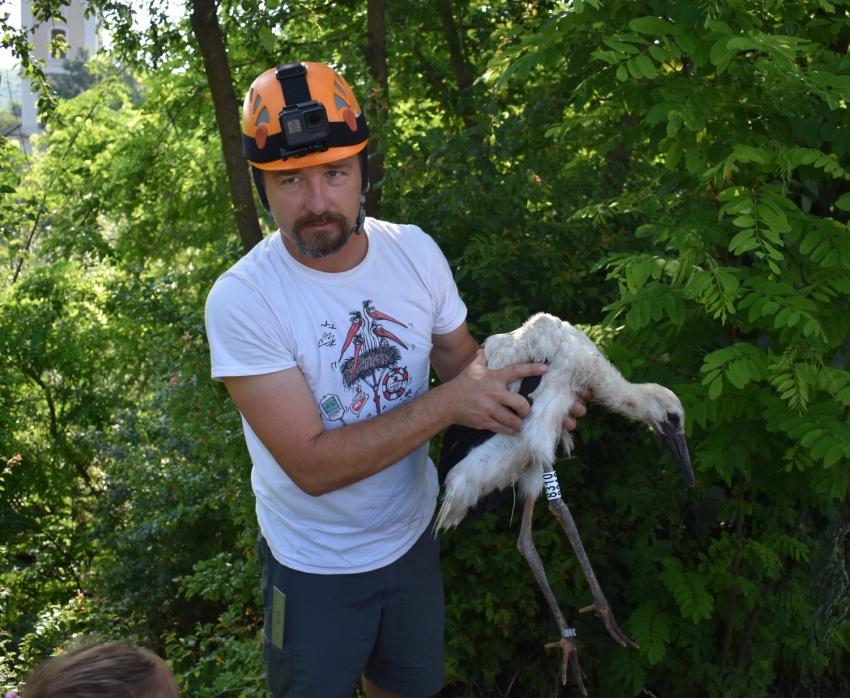 On Monday morning within the framework of the ringing program of the Milvus Group – Bird and Nature Protection Association we ringed the stork chicks growing up in the nest in Magyarfenes/Vlaha. The storks received a small metallic tag mounted on the left leg, with the inscription “Romania” and an individual number. The bigger, white cylinder where there is a black number readable with a telescope was mounted on the right leg, on the thigh. The storks ringed in Magyarfenes/Vlaha received the numbers 8307, 8308, 8309 and 8310. The length of the beaks of all the storks was recorded also. The lifting up to the nest was done by a bucket especially rented for the stork ringing. The little storks were covered by a blanket to avoid their jumping out of the nest in fear. One of them, the one with the number 8310 was brought down from the nest for  a short period of time so that the kids gathered for the event could study and pet him.
The ringing continued in ten nests in Járarákos (Vălișoara), Alsófüle (Filea de Jos), Csürülye (Ciurila), Szelicse (Sălicea), Sütmeg (Șutu) Pusztaszentkirály (Crăești) és Magyarpeterd (Petreștii de Jos) where rigns were applied on 39 storks altohether. Comparing the length of the beaks of the little storks growing up in diferent nests we can state that the ones from Magyarfenes/Vlaha are among the well formed ones. The costs of the renting of the special car with the bucket was partially covered by the local government of Tordaszentlászló/Săvădisla.
More pictures here.