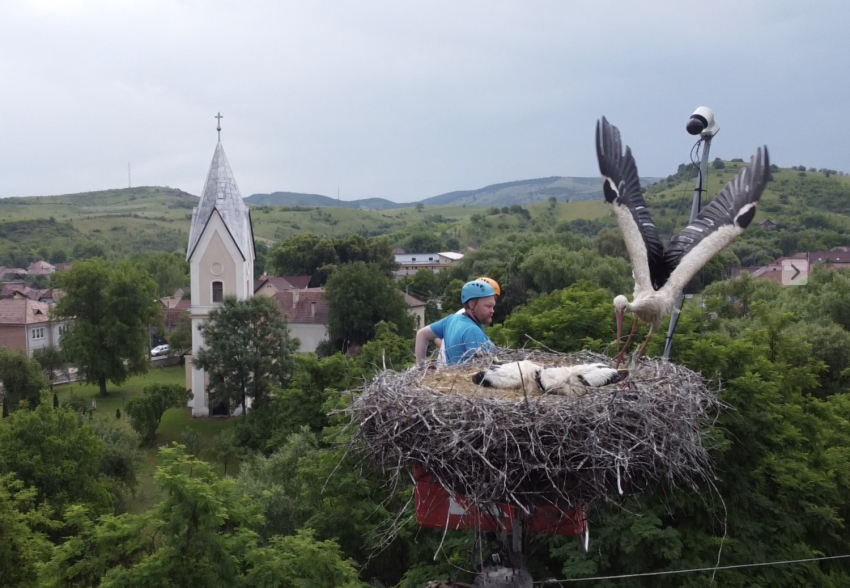 On Tuesday, June 21, we ringed the little storks rearing in the nest in Magyarfenes. About 25 children were accompanied by their parents and grandparents to the event. They also had the opportunity to pet one of the young storks brought down for ringing. All storks have a metal ring on their left leg, which helps in identification if the bird dies, and someone finds its remains. A white plastic cylinder on which a four-digit number was written in black was placed on the right leg. This number can also be read from a photograph, so it is also suitable for identifying the living stork.
Ringed birds are monitored all over the world, and based on the data reported about them, researchers draw conclusions about their route, their habitat in Africa, and their speed. The method has now become somewhat outdated, as it is now possible to install a transmitter on each stork, which can be used to obtain more accurate and detailed data.
Nevertheless, the data obtained in this way cannot be neglected either. Based on the photos taken and reported of the ringed storks, we know, for example, that the little stork ringed in the Vlaha nest in 2018 returned to Bistrita County two years later. From this we also know that one of the members of the foreign flock that marched through the village last fall came from the Polish settlement of Podczerwone near the Slovak border.
This year, the Vlaha younglings received the numbers 7842, 7843, 7844 and 7845. We put the plastic cylinders on their feet in the hope that we will hear about them soon.
When ringing, we also record the length of the storks' beaks, so that we can learn about their development and the differences in size between individuals. Although the live broadcast does not show a significant difference in size between the little storks, one of them had a beak of 100 millimeters, two of them had a beak of 95 millimeters, and the smallest one - which the children could also pet - was 92 millimeters long.
The photo shows the moment when the basket of the forklift rises to the level of the nest with the specialists, and Leske - who was guarding the baby storks - flies away. You can see the photos of the ringing here.